We use cookies to help us identify and track visitors, their usage of Avail Advisors website, and their website access preferences. Our site also uses Google Analytics which uses cookies to collect and track information about your site usage. Please click on agree to allow Avail Advisors to write cookies onto your computer. Clicking disagree or taking no action will disable Avail Advisor's cookies only. Third party applications and connections on this site may use their own cookies. By continuing to use this site, you agree to allow third party applications and connections to store cookies on your device. Please see our privacy policy for additional information.

I disagree I agree

The other day I was speaking with a leader about bringing my Rethinking Data workshop into her organization.  Before I could get too far she stopped me.  She said, “Brad, we don’t need your workshop. We are a heavily data-driven organization.”  Then, to back up her statement, she showed me several “data-rich” presentations and reports. The presentations contained forty or more slides mostly consisting of charts, tables, and graphs.  The reports had multiple tabs (sometimes up to 15 or 20) each containing over 20 columns and 50 or more rows.  She said that they’ve gotten the message that data is important.  After seeing this I replied, “Let me tell you a bit more about my workshop.”

There’s a difference between being data-driven and simply obsessed with numbers. And, it’s an important difference.

Data-driven companies understand that the value of data isn’t the data.  Rather, value comes from the conclusions, decisions, and actions that result from the data.  This is where they focus.  The important role that data plays is to ensure that those conclusions, decisions, and actions are based in facts. Having fact-based evidence and putting it on an endless display are two very different things.

When making decisions, data-driven companies take that broader context into account.  They synthesize the data and context to create simple, fact-based recommendations and conclusions. While their statements are simple, they are not hollow.  They can be backed up with detailed and specific data and analysis.

On the other hand, numbers-obsessed organizations act as if the value of data is in the data itself.  This becomes their focus.  These organizations put data front and center but don’t seem to talk about anything else.  Their leaders spend more time memorizing the current value of every metric, “in case someone asks”, than they do in thinking about what those metrics mean.

In a numbers-obsessed organization, leaders insist that people walk them through every piece of the data prior to making a decision. They feel compelled to look at data even when they are already aware of the key points being made in the argument.  Their reports and dashboard are full of numbers rather than simple answers.

Numbers-obsessed organizations focus their discussions on metrics and numbers. They often don’t get to the decision or when they do, it takes a lot longer.  They either get mired in specific details and data points that don’t influence the decision in the first place or they never wind up talking about what all of those numbers mean.

Having, displaying, and talking about data does not make you data-driven.  Being data-driven requires that you parlay that data into meaningful action.  The best data-driven presentations take into account the greatest amount of data but show the least.

Is your organization truly data-driven or are you simply numbers obsessed?  If you are spending more than about 10% of your time talking about numbers, you may be focused in the wrong place.

Are you data-data driven or obsessed with numbers? 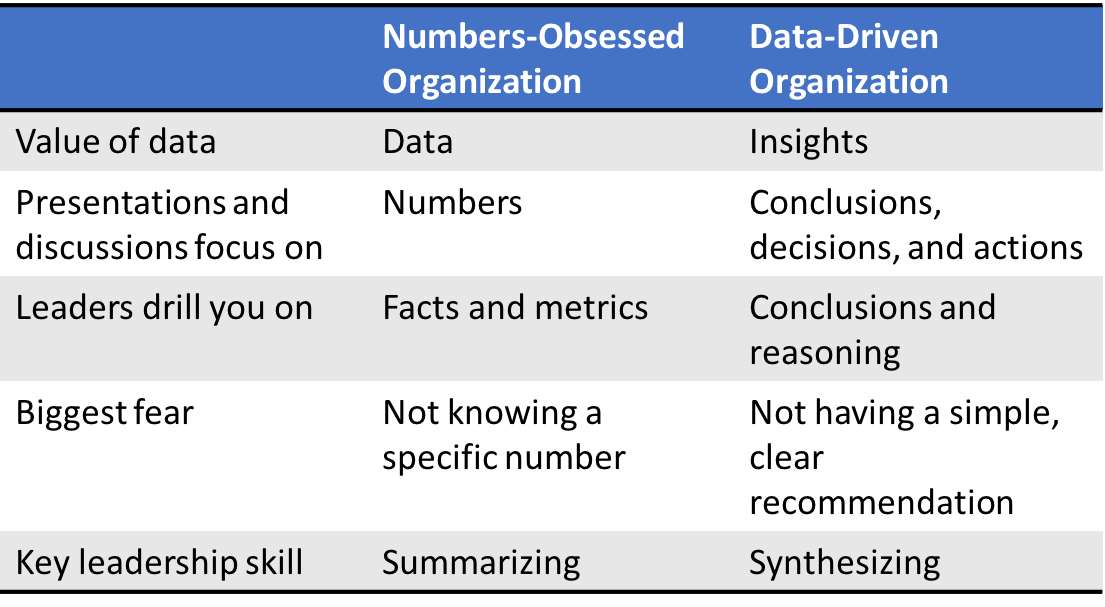 Brad Kolar is a consultant, speaker, and author with Avail Advisors.  Avail’s Rethinking Data workshop will help your organization make the shift from being obsessed with numbers to being truly data-driven.